by the team at The Genius of Play

According to new research commissioned by The Genius of Play and conducted by OnePoll, seven in 10 parents believe spending a year in quarantine will have long-term effects on their child’s growth and development.

An overwhelming majority (70 percent) also fear that their children under age 7 will not even remember a time before the pandemic. Here are more details and some positive play ideas to pass on to parents and teachers.

Managing Mental Health
Just as The Genius of Play’s earlier research during the pandemic had indicated, children’s mental health continues to remain a central concern for parents. In this latest survey, four in 10 parents expressed these anxieties.
• More than 70 percent of parents said they believe that in 2020, their child was lonelier than ever before. It was a feeling that carried over into their own lives – nearly 60 percent said they, too, felt lonelier during the pandemic.
• Close to half of parents said they set up virtual playdates for their kids with friends to combat loneliness.
• Half of the parents said they make sure kids spend time virtually with other family members.

Staying Positive
While it may often seem difficult to find a silver lining for 2020, parents did report some positive outcomes of the pandemic. At the top of that list was spending more time playing with their child (46 percent). Here are some other positive outcomes parents reported.
• 74 percents said they have encouraged their child to play more to balance out their feelings of loneliness.
• 76 percent of parents said playing with their child has been a positive escape from the reality of the pandemic.
• 49 percent of parents reported spending more time outside.

Engaging children in board, card and dice games helps them learn waiting, turn taking, sharing, making conversation, compromising, how to cope with losing and much more. The Hoyle 6-in-1 Fun Pack from The United States Playing Card Company contains six classic card games, from Old Maid to Go Fish. Other good Hoyle games include Seal Squad, “the fishy game of cooperation”; Monkey, May I?, which emphasizes self-control, self-awareness, and making good choices; and Super Me! that helps develop empathy (see the ad on the inside front cover).

Sum It Up and Go Figure! from Didax are so fun that players may not realize that they’re honing their math skills (see the ad on this page).

Perfect for virtual playmates are question-and-answer games like Would You Rather? Made You Think! (see the book by middle school social studies teacher Lindsey Daly), and conversation starters like Table Topics to Go from Fat Brain Toys.

From Children’s Factory is a set of four giant Nest ’N Stack blocks and a set of 60 big Snap Blocs that are ideal for parent-and-child interactive fun, both indoors and out.

The Genius of Play (geniusofplay.org) provides information and inspiration to make play an important part of a child’s day. Through its website and social media channels, it provides facts, useful tips and expert advice on how play can help kids build confidence, creativity, critical thinking and other skills. Genius of Play is managed by The Toy Association, the not-for-profit trade association representing businesses that design, produce, license, and deliver toys and youth entertainment products for kids of all ages. 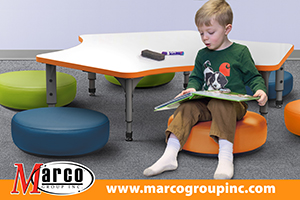